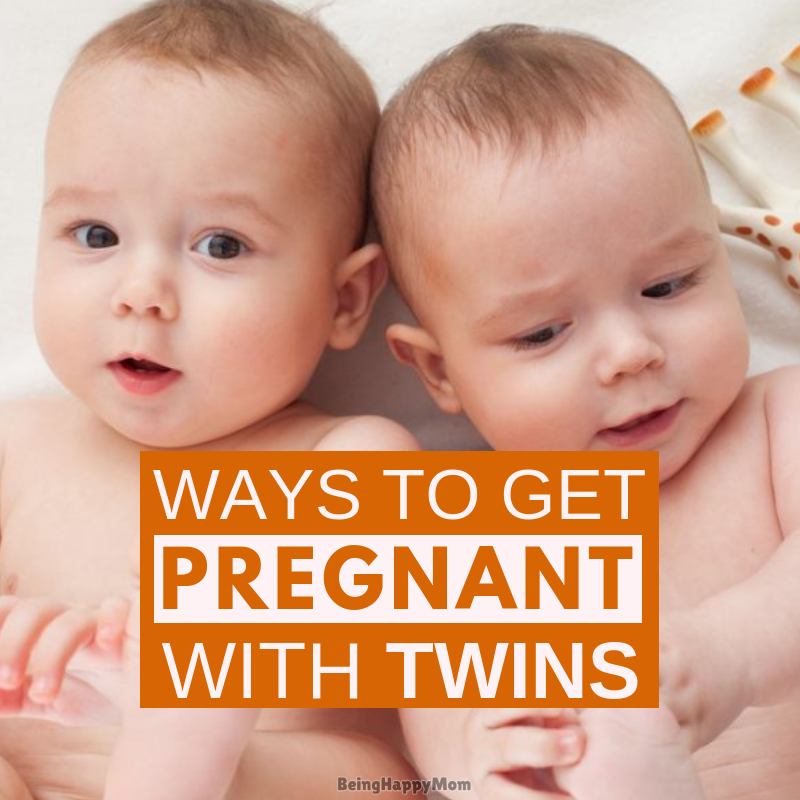 Are you dreaming of playing with your little twins?

Do you know it is not only for people those who have a twin family history but also possible for any woman to get conceived with twins? Well, if you are worrying of second labor pain, consider having twins in the first delivery itself. Yes, it is possible to get pregnant with twins naturally.

If you are keen to increase your chances of a twin pregnancy then you should be aware of many important factors about twin formation. We have listed, all the possible natural ways to get conceived with twins.

How Are Twins Conceived Before getting into the steps, let’s understand the processes behind the formation of twin babies. Twins are of 2 types.

Identical or Monozygotic or Non-fraternal Twins – developed when one sperm fertilizes one egg. Later it will split into two separate embryos. Both these embryos have the same genetic structures. And, they share the placenta.

Non-identical or Dizygotic or Fraternal Twins – developed when two separate sperms fertilize two separate eggs. Both of them are unique in their own way, no identical genetic structures other than their own siblings. Also, each one has its own placenta.

What will determine the chances of having twins?

Heredity – When the woman has a genetic family history of twins, then the chances are high for her become a mother of twins. Her heredity influences the chances of her hyperovulation (releases more than one egg in one cycle) which can lead to fraternal twins.

Apart from this, if you are a twin yourself or if you have twin siblings, you are extremely prone to get conceived with twins.

Age – Age is an important factor while you consider planned twins. After the 30s, women produce more follicle stimulating hormones which increase the chances to have twins. And, the chances are 17% higher if you are over 45 years based on various studies and research.

Ethnicity – Do you have an African ethnicity? As per statistics, the rate of having twins for African woman is 1 in every 22 women. Because the rate is so high, the occurrence of having twins through generations will become more likely. Like this, American heritage also has a higher rate of twins.

Body Type – Are you overweight or obese? Then the possibility is high. Your BMR (Basal Metabolic Rate) determines the chances. Women have a BMR above 30 are more prone to have twins. Also, if you are tall, then you are more likely to get pregnant with twins.

Best Foods To Conceive Twins in 2021 Women who eat dairy products like milk, butter, yogurt etc, have higher chances of getting pregnant with twins. As per the studies were done by Journal of Reproductive Medicine, milk drinkers were five times more likely to have twins than women who ate no animal products. Its believed that it happens because of an insulin-growth hormone (IGF) present in the cow’s milk which improves the survival chances of an embryo in the early stages of development. As we mentioned earlier, African women have higher chances of twin formation, its due to their diet. Their diet includes more of wild yams, a protein-rich food item which is often promoted as a natural alternative to estrogen therapy in women. Wild yams hyperstimulate the ovaries which in turn release more than one egg for ovulation. Zinc-rich foods like bread, seeds, oysters and leafy vegetables have the property to stimulate sperm production, which in turn increase the possibility of fertilizing more than one egg. So, advise your partner to eat more zinc-rich foods to help in the sperm stimulation. There are many protein-rich foods which increase the chances of twin pregnancy. Some of them are whole wheat, tofu, soy, isoflavones, and whole grains which has hyper-ovulation stimulating properties.

Best Fertility Herbs For Having Twins

There are few useful herbs which can boost your fertility of getting conceived with twins. Licorice, a sweet herb helps the ovulation process by regulating the menstrual cycle. It also controls the hormonal level of testosterone and estrogen and thereby increases the chances of fertilization and supports in the conception of twins.

Maca root is an adaptogen herb( improves your body’s ability to adapt to stress) which helps boost fertility in both men and women. Also, it helps in the healthy functioning of the female reproductive system. Its overall support to both man and woman increase the chances of twin conception.

Flaxseed oil not only controls the hormone balance but also promotes fertility in women. Beside this, it helps regulate the menstrual cycles, all these increases the chances of twin babies.

Primrose oil is considered a fertility booster for centuries. It helps in the healthy cervical mucus production process in women’s reproductive tract which helps the sperms to survive for longer days. Take evening primrose oil at the peak days of menstruation and continue it up to ovulation which helps in twinning.

Check out – Complete guide on breastfeeding It is widely believed as certain sex positions can increase the chances of conceiving twins. Certain positions ensure that the sperm is placed close to the cervix. Along with these deep penetration positions, if you choose a method that makes you hyper-ovulate then you might have higher chances to get pregnant with twins.

This method gives deep penetration into the cervix, thereby increases the chances of fertilization.

Doggy position is one of the best to get higher penetration which ensures sperm can be released into the cervix.

This oldest and the most intimate man-on-top position allows the semen to get deposited close to the reproductive system which gives a great possibility for twin formation.

Anvil is a modified version of the missionary position, there, the woman put one of her legs on man’s shoulder which in turn gives deeper penetration. This allows the ejaculated semen to reach the cervix immediately which in turn increases the chances of conceiving twins.

While you are trying the ways mentioned above, always keep in mind that all these methods give you an option of natural ways to give a try on your dream of having twins. There are chances to fail even, try with more than one method. Happy twinning.